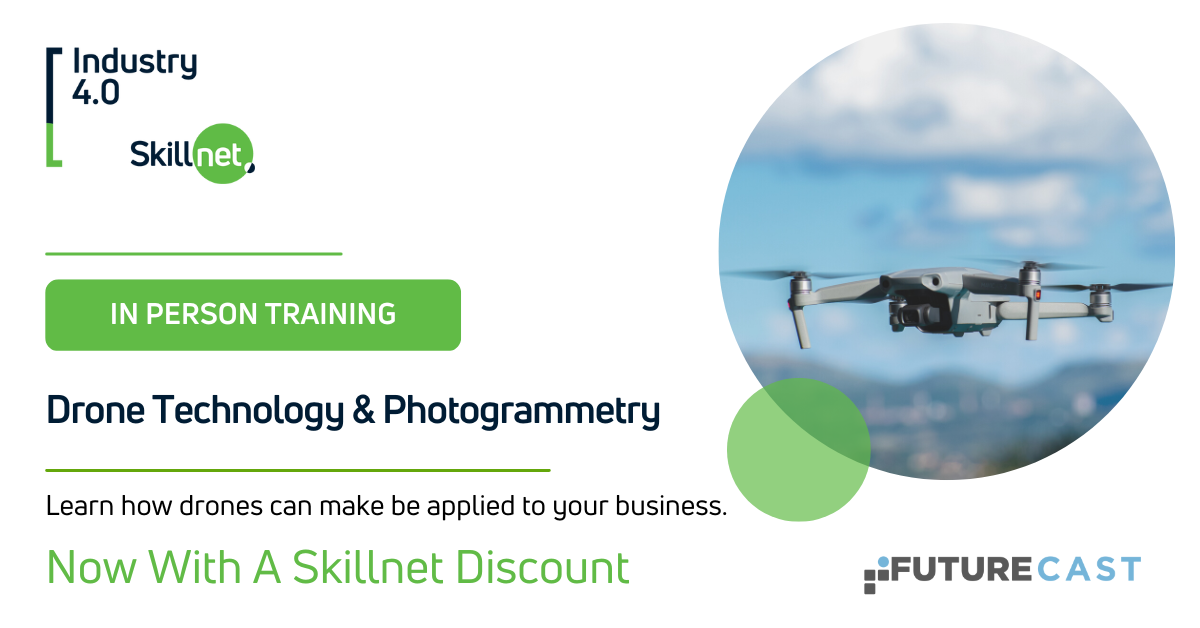 To be invoiced for the cost of the course, please submit an enquiry with the course title as the subject line.

This course allows participants to establish how the use of Drones can help in many industries, as they are able see and capture more data from the sky than traditional methods also being able to see the ground for inspection purposes where a man cannot easily access, then being able to convert the data to an accurate model which can be mapped directly on to the likes of AutoCAD and flag issues on the ground. (Check the condition of power lines through forestry for example)

*With a Skillnet discount of 20%

Enquire for more dates or visit our events calendar here.

Understand what a drone is

Drone technology workflows, to capture X,Y,Z data and produce survey grade accuracy deliverable data to their clients. This course will teach you a workflow that has been tried and tested. The workflow that you learn on this course can be used for any type of Drone whether it be an RTK Drone or a Non-RTK Drone. The workflow was established using a Non-RTK Drone and then modified when RTK Multi-Rotor Drone technology came about.

Where they are at in the tech world right now

We cover Basic Flight Modes to Advance Modes tech. Training will allow you to conduct Inspections of different Structures. Our team has wealth of experience in different types of drone hardware and software in drone technology flying from Coast defense, Topographical, Stock Piles, Cinematography and Inspections

Learn the possible applications for all industries

Architects are always trying to integrate new buildings into the existing environment. Whether they want to set accents with their designs or whether they should be as integrative as possible, pictures can support this work. Drones are best suited for this work, because they can fly very close to the roofs and thus allow a good perspective of the buildings. These images are used from the tendering phase to the construction progress and documentation

Drones for quarrying and mining

Drones have two major uses in quarrying and mining. First, they are used for measuring applications in the field of surface quarrying. For this, the drone flies over the open pit and takes a high number of pictures in different angles and from different locations. With the so-called photogrammetry, a three-dimensional point cloud is created, from which a scale realistic map can be generated. This map is then used for volume measurement and for the planning of the quarrying or mining. Likewise, this method can be used to measure large quantities of raw materials to determine their value during the inventory.

Second, drones have a much more complicated application: the measurement of underground tunnels. Drones with an integrated laser measuring system are currently being used for this purpose. The drone scans the environment as a point cloud and then sends huge amounts of data to a computer. As soon as the measuring point is stored, the drone autonomously flies a few meters further and picks up the next point cloud. The sum of all point clouds then provides a detailed map of the tunnel

The use of drones in cable construction is critical. Powerful drones are used to lay the first ropes. To raise the rope of a cable, a small line or a thin rope is placed over the support from station to station. Drones take over this task as they can easily fly over ravines or trees. The rope is wound on a reel that carries the drone. The drone flies from pillar to pillar and lay the rope along the desired route. This rope is then used to raise a thicker rope that in turn can raise an even stronger rope until finally the last thick rope of the cable car can be pulled.

Drones in the oil, gas and on and offshore wind industry

Inspection services are needed. These tasks can often be done by drones. Drones can perform a visual inspection of industrial plants such as drilling rigs, On and off-shore wind units. The practical thing about using drones is that georeferenced images can be created. From these images, a model of the inspected plant is generated. This model can then be analyzed and documented. In case of damage, the insurance can be told that the damage has occurred recently, which can be easily proven. For damage that does not necessarily have to be repaired, the behavior can be tracked and monitored over a longer period.

Learn how to apply to the industries/ Cases studies

Real-time aerial inspection allows for the ability to quickly survey sites or catch mistakes. According to PwC, threatening accidents on construction sites monitored by drones decreased by up to 91 percent.

1.Caterpillar, one of the largest construction equipment manufacturers, invested in drone startup Airware. Their services will be offered via Caterpillar’s existing dealer network. The company’s drones can be used for inspecting roofs, construction sites, mining operations, and utilities.

2. Warehousing and Inventory Drone Applications Wal-Mart has been testing the use of drones in its warehouses to check and flag missing items. According to the company, drones flying through the warehouse can do a full inventory check in a day, a task that currently takes a month for people to do manually. While it appears that Wal-Mart may be developing their own drones for inventory applications, there are plenty of drone vendors intent on entering the space

This course will make you eligible to take your drone licence.
(Cost of additional €148)

Measurements between collecting and processing the data, traditional mapping (surveying) methods take time, and they require human labour. Beginning with high-res photo and video capture, a drone can do the job far more quickly at a much lower cost than traditional methods. But, equipped with a LiDAR sensor, drones can do the same or better surveying a job in 60 to 70 percent less time. Moreover, if a construction site is dangerous or difficult to survey, drones can do the job, eliminating any risk to people. Since LiDAR works by transmitting a laser beam and measuring the return reflection and it’s situated on the drone—which is airborne—topography that would’ve been difficult to navigate on foot becomes a non-issue. Mapping (surveying) has been made much easier by making data collection simple and made available for 3D modeling and analysis.

When new technology comes along, it’s tempting to discount it as just another shiny new toy. But drone photography is a practical way to solve old problems, such as the challenge of monitoring construction progress. It is challenging to capture the photos week after week with the same view, location or altitude. Drones solve these problems with easy to repeat flights each week so that your progress photos and reports always look consistent and capture the key information you need. Eliminating variances in this process drives productivity and lowers costs. By identifying any phase of the project that is getting delayed and monitoring your job sites, you will have the project intelligence to proactively take steps that will reduce rework that will negatively impact cost and schedule. The more information you have at your fingertips, the more control you have over your project ultimately.

As anyone in the construction industry knows, communication is everything. With so many different types of contractors coming in and out, site condition changes, weather changes, and more, it becomes vital to keep an eye on the big picture. And drone photographs provide that big picture view. The aerial view gives the team a different, valuable perspective. Supervisors can sit down with a highresolution drone map and quickly catch or anticipate any site access issues, potential drainage problems, or threats to health and safety. Then they can more effectively communicate with their team about site issues and resolve them.
We use cookies on our website to give you the most relevant experience by remembering your preferences and repeat visits. By clicking “Accept All”, you consent to the use of ALL the cookies. However, you may visit "Cookie Settings" to provide a controlled consent.
Cookie SettingsAccept All
Manage consent

This website uses cookies to improve your experience while you navigate through the website. Out of these, the cookies that are categorized as necessary are stored on your browser as they are essential for the working of basic functionalities of the website. We also use third-party cookies that help us analyze and understand how you use this website. These cookies will be stored in your browser only with your consent. You also have the option to opt-out of these cookies. But opting out of some of these cookies may affect your browsing experience.
Necessary Always Enabled
Necessary cookies are absolutely essential for the website to function properly. These cookies ensure basic functionalities and security features of the website, anonymously.
Functional
Functional cookies help to perform certain functionalities like sharing the content of the website on social media platforms, collect feedbacks, and other third-party features.
Performance
Performance cookies are used to understand and analyze the key performance indexes of the website which helps in delivering a better user experience for the visitors.
Analytics
Analytical cookies are used to understand how visitors interact with the website. These cookies help provide information on metrics the number of visitors, bounce rate, traffic source, etc.
Advertisement
Advertisement cookies are used to provide visitors with relevant ads and marketing campaigns. These cookies track visitors across websites and collect information to provide customized ads.
Others
Other uncategorized cookies are those that are being analyzed and have not been classified into a category as yet.
SAVE & ACCEPT